Video:
In attempt to increase screen-to-body ratio, the smaller notch is becoming one of the biggest trend in smartphones in recent months. And with recently leaked UMIDIGI video we can indeed confirm UMIDIGI One Max will come with a waterdrop-style display like One Plus 6T and Huawei Mate 20.

In the leaked video we can take a glimpse of the engineering sample of the UMIDIGI One Max with the water-drop -- or in other words an extremely tiny -- notch. Even though the video is just few seconds long you can get some idea about the looks and design of the device. It’s obvious that just like One Plus 6T, UMIDIGI One Max will have a high screen-to-body ratio full screen. Our UMIDIGI sources confirmed that the waterdrop full screen display of the One Max will be 6.3-inch -- a big full screen display. 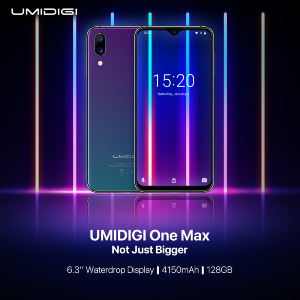 From the previous leaked we confirmed that the One Max will be packed with 128GB ROM and 4150mAh big battery. The popular twilight gradient color will also available on the One Max, just like the same series UMIDIGI One Pro. Hopefully more will be revealed soon and we will surely keep you informed.

OPPO A59 rom file-stable and available